The National Transportation Safety Board did not travel to the scene of this accident.

On December 12, 2018, about 1430 Hawaii-Aleutian standard time, a Hawker Hunter MK-58 airplane, N323AX, was destroyed when it impacted open ocean shortly after takeoff from Daniel K Inouye International Airport (HNL), Honolulu, Hawaii. The airline transport pilot was seriously injured after he ejected from the airplane prior to impact. The airplane was registered to Hunter Aviation International and operated by Airborne Tactical Advantage Company (ATAC) as a public aircraft. Visual meteorological conditions prevailed at the time of the accident and an instrument flight rules flight plan was filed for the local flight that departed about 1428.

The purpose of the flight was to support adversary and electronic warfare training with U.S. military forces. The accident airplane departed as the wingman in a flight of two Hunters, intending to participate in an adversarial support air-to-air training exercise ("Sentry Aloha") off shore in warning areas W-188C, W-189, and W-190. The flight's radio call sign was "ATAC 01," and the accident airplane was "ATAC 02."

The pilot reported that during the departure phase of the flight, the engine experienced a loss of power about 500 ft above ground level during the departure turnout. The pilot attempted to restart the engine, but the airspeed continued to decay, at which point he decided to eject. After he ejected from the airplane, the pilot reported that he got one swing in the parachute prior to water entry. The airplane wreckage subsequently sank. 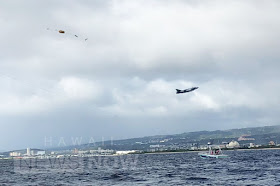 HONOLULU (HawaiiNewsNow) - Multiple agencies will meet Thursday morning to determine who will handle the investigation and salvage efforts following a fighter jet crash off Honolulu that seriously injured a pilot.

A military spokesman said the pilot was a civilian contractor flying a British-made Hawker Hunter aircraft for a military training exercise for the Sentry Aloha war games.

The pilot of the craft ejected moments before the crash Wednesday just before 2:30 p.m., about three miles south of the Reef Runway at Honolulu’s airport.

He was rescued and brought to shore where he was hospitalized in serious condition.

The pilot was identified as 47-year-old Matt Pothier.

Wednesday night, his wife said he was in good spirits and in recovery in a local Emergency Room. She declined a formal interview, but added that other pilots stopped by Pothier’s room to wish him well.

She said they’re both grateful his injuries are not life-threatening.

Following the crash, outbound flights from the airport were halted for about 20 minutes, but have since resumed.

The Sentry Aloha exercises were temporarily suspended for the rest of Wednesday, but will resume Thursday morning.

Shortly after the crash, a parasail operator rescued the pilot and he was then picked up by a Coast Guard vessel.

Mack Ladner, of Extreme Parasail, was the good Samaritan who jumped into the water to help save the pilot.

“When I got into the water, I was asking him, are you OK? And he said yeah, my back hurts from the compression," Ladner said. "He had a little bit of blood coming out, I think it might have been from the impact because he was going pretty fast.”

"Then we saw his parachute come out and his plane go straight into the water and basically nosedive into the water,” Muir-Lowery said.

Her boyfriend, Dennis Alston, called what he saw “unbelievable.”

"I’ve never been that close. I knew the plane was low. But it kept getting lower and lower and then it actually hit the water and the impact was crazy,” said Alston.

Witnesses fishing nearby said they saw the Hawker Hunter starting to fall shortly after takeoff.

Chang said there was lots of fuel in the water after the crash, but very little debris.

Mark Neumann, owner of Hawaiian Parasail, said the plane crashed near one of his boats in the water.

Two people were in a parasail at the time, and the crash came too close for comfort, he said.

“My captain and crew thought it was going to hit the parachute,” he said. “It went by and right after it went by them, the pilot ejected and the plane crashed into the water real close to our boat.”

He said none of his crew members or customers were injured.

Paramedics said the man was in serious condition after being recovered. They described the crash as a “controlled fall," and said the man suffered unspecified traumatic injuries.

The plane was owned by Airborne Tactical Advantage Company, which is a civilian “tactical airborne training organization." A company spokesman said they are investigating.

Rescuers, including the Coast Guard and members of the Honolulu Fire Department, remained at the scene of the crash into the late afternoon.

The Coast Guard is currently maintaining a 300-yard safety zone perimeter around the crash site amid the ongoing investigation.

New comments are not allowed.